For many years, a grand house stood on the west side of Denmark Hill around where the Co-Operative supermarket stands now.

It was called Northampton House and it was the home of Spencer Compton, Earl of Wilmington. He was born at Compton Wynates , the family home c 1683 and died aged 70 on 2 July 1743 in St James.

This portrait was painted c 1710. He was born the 3rd son of the 3rd Earl of Northampton and was educated at St Pauls and Trinity College, Oxford.

The following two images come from the Southwark Local History archives and show the front and rear view of Northampton House in the time of the 1st Earl of Wilmington.

Both images cleaned up by Nick Stevens, July 2016

In Dewhirst’s Map of 1842 you can see the House and the Grounds.

For a time, Compton became Treasurer to the Prince George of Denmark , husband of Queen Anne.

He was unmarried and when he died in July 1743 he left his entire fortune to his nephew, the 5th Earl of Northampton.

The next record I have come across for Northampton House is as a home to  Mr and Mrs John Norris. This advertisment from The Morning Advertiser 05 February 1829

Next, we have records from 1851, showing that Northampton House is now being used as a school run by Mr HA Matthews.

This report on a public examination of Northampton School pupils in The Era, 19 December 1859

And again, another advertisment dated 11 May 1861  in the Cambridge Chronicle & Journal

By 1868, Northampton School was under the headship of The Rev A Farbrother.

By 1876, Northampton House was now used as a showroom/shop, home to Robert Slagg a costumier and fancy goods seller.

Added October 2016. This drawing in the Lambeth Archives dated c 1890 shows the Drapers & Milleners now in the charge of HB Collins.

According to Mary Boast in her book The Story of Camberwell, published in 2000 as part of the London Borough of Southwark, Neigbourhood History series no 1, Northampton House was demolished in 1908.

In it’s place was built the Golden Domes Cinema, which opened around late 1913/early 1914. 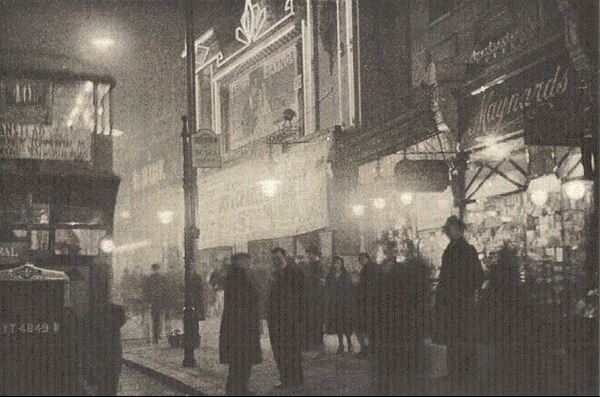 In 1952 it was renamed the Rex Cinema and renamed again as the Essoldo Cinema from 8th January 1956. It remained as a cinema until it’s closure on 1st August 1964.

This photo was taken in August 1964 just before it’s closure as the Essoldo Cinema.It then became a series of supermarkets unfortunately with grand facade removed. A Kwik-Save

and lastly a Co-operative. (see photo at top of article).

Like Loading...
This entry was posted in Denmark Hill, Northampton House and tagged Denmark Hill. Bookmark the permalink.