233 Coldharbour Lane, or as we know it today, Loco

For many years now, 233 Coldharbour Lane has been open as a mini supermarket named Loco. This store is opposite the Tesco store which took over the Warrior pub after it closed, I think,  in 2002,  having been open since it was built in 1868.  To the left of the photo is a fish and chip shop and then on the corner of Hinton Road, what was the Green Man pub, now the Green Man Skills Centre.

The earliest record I could find was from 1856 when a William Mercer ran a grocery from 1 & 2 Maria Place, later renumbered as 233 Coldharbour Lane in 1874. He was succeeded by his son  Frederick Mercer in 1864.  Local trade directories held at Minet Library, home of Lambeth Archives show Frederick still in business in 1873.

In 1907 arrives Frederick Charles Whitehead & Co and he runs the business until 1912. Luckily for us we have this postcard of Harbour Stores. 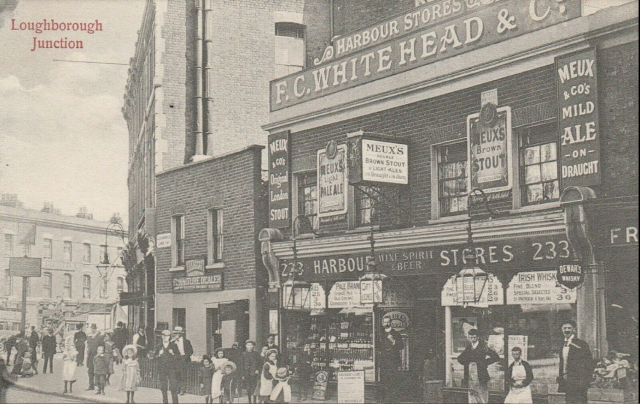 Obviously, the taking of this photo was of great interest to many locals. I guess that is Frederick Whitehead standing at the entrance.

Next door to the left is Leggatt’s a furniture dealer. Thomas David Leggatt was there from 1888 to 1919. It then became one of the many Jaffe fish & chip shops.

From 1914, Patrick and Macgregor Ltd return to run the business, followed by Charles Albert Davis, from 1920 to 1929.

During 1930, the shop was taken on by E & AM Page, Ernest and Amelia Page through to 1971.  During the replacing of the old Loco shop sign for a new sign shown at the top of the article, the original Ernest Page sign was uncovered for a while.

I don’t have a credit for this photo, if it is yours, please let me know and I will credit you.

Ernest & Amelia Page ran other wine & other spirit shops, including 78 Loughborough Road from 1928 till 1967. And I understand shops in Peckham, Oval, Herne Hill and South Lambeth Road.

From 1975 the wine & spirit shop is run by a national chain called Unwins, I have them there until 1986.  Haven’t been able to find out when Unwins stopped running the store. Or what was there between 1987 and 2008 when is became the Sunstar grocery. My memory is poor. Any help would be welcome.