The following photo shows the current building on the site of Norfolk Lodge. Taken in June 2016.

He was born in 1791, the son of Charles & Sarah Gastineau. Both his father -Charles b. 1735 and grandfather -Charles b 1702 were born in Engalnd however his Great Grandfather Matharin was b 1163 in France. Charles Gastineau (father) was a tea-merchant in the City of London. He married Mary Knaggs  July 15 1819 and had 5 children: John, William, Ann Jane , Robert and Maria who was also a landscape painter.

Henry Gastineau was a topographer and landscape artist. He trained as a engraver and then studied at the Royal Academy School. Thereafter he travelled widely painting landscapes and buildings. He is best known for his extensive work in Wales. Here is a link to the National Gallery of Wales who hold a large number of Gastineau’s Wales work.

He was elected as a member to the Society of Painters in Water-colours 1818 and went on to exhibit his paintings for 58 years. 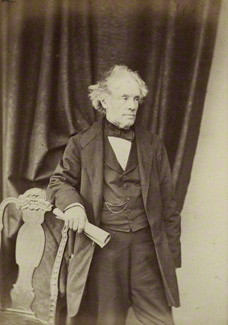 This photograph of Henry Gastineau, part of the National Portrait Gallery collection was published in 1864.

Gastineau’s work features in a number of books including The Surrey Tourist (or Excursions through Surrey) 1821, Excursions in the County of Kent-1822 and Wales Illustrated – 1829.

Henry Gastineau was a good friend of JMW Turner and John Constable and often accompanied Turner on excursions to the Lake District and Switzerland.

Here are a couple of Gastineau paintings featuring London scenes.

This engraving by Henry Gastineau of Fountain Cottage on the John Lettsom Estate in Camberwell in 1811 was published in volume iv of the Beauties of England and Wales.

This painting is titled St Paul’s from Greenwich and dates from 1823.

There is one Henry Gastineau painting in particular I would like to be able to feature on this blog. It is titled Camberwell Landscape c1820 and features a view painted from the Norfolk Lodge back garden looking east over farmland towards St Matthews Church on Denmark Hill and with the spire of St Giles, Camberwell in the further background. It is owned by the Borough of Southwark and was featured on the Southwark Art Collection website, though the image was never available.If any one has a copy I would love to feature in this post. The Southwark reference number is/was GA0258.

October 2016: As luck would have it following on from above, I found a copy of the above painting in The Old Water-Colour Society’s Club, The Fifty-Second Annual Volume, edited by Adrian Burt and published for members only in 1977 by the Society. The Annual titles it St Giles Church, although it is St Matthews Church with the St Giles spire in the background.

Mary Gastineau died on 25th March 1861 in her 74th year. Henry Gastineau died aged 86 years on the 17th January 1876, he was interred at Norwood Cemetary. He was a prolific artist who even in 1875 exhibited 11 pictures at the Society of Painter in Water-colour exhibition. He died according to the Morning Post in its obituary of a gradual decay of nature. 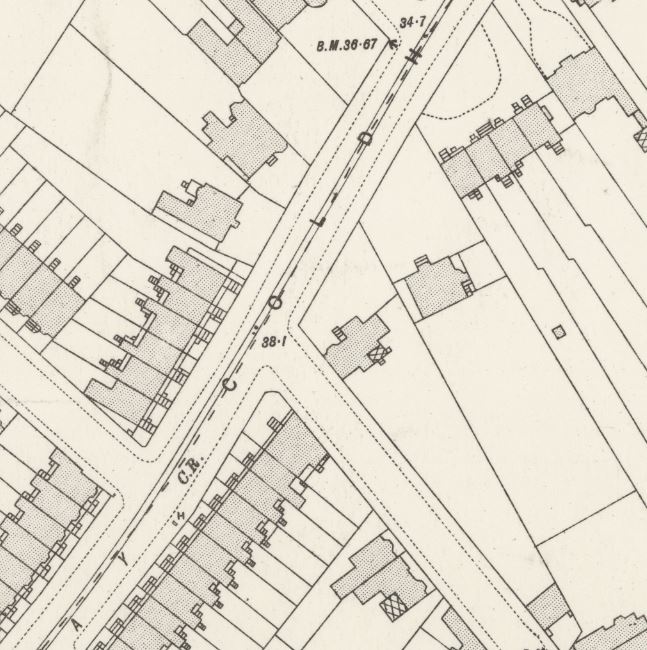 The extract above from the Ordanance Survey map 1893-6 shows Norfolk House on the corner of Coldharbour Lane and Vaughan Road.

Norfolk House survived until WW11 when it was destroyed following a bombing raid.

Thereafter it became in turn a temporary coach park then a permanent coach park used by Redwing Coaches until they moved to Milkwood Road and the housing deveopment in the photo at the top of the page.

Thanks to corresponent Angela, we record that Henry Gastineau’s father Charles (1735-1818) also lived in Denmark Row. Anne-Jane Gastineau, Henry Gastineau’s daughter married Arthur Hills of Woodside in Norwood. She must have inheited many of the Gastineau paintings as Angela tells us that Albert Edward Hills, Annie and Arthurs’s son who made his fortune in Birmingham through the manufacture of steel tubing donated a large number of Gastineau watercolours to the City Art Gallery. His brother Douglas Hills in 1944 also donated paintings to the Museum & Art Gallery in Birmingham.

And it seems that Thomas Francis Gastineau, brother to Henry also lived in Coldharbour Lane in Adelphi Place.